I love regex. So four years ago, I dedicated dozens upon dozens of hours to create the best regex testing and reference site I could. I called it Regex Storm. I’ve already talked about the experience in a previous retrospective. 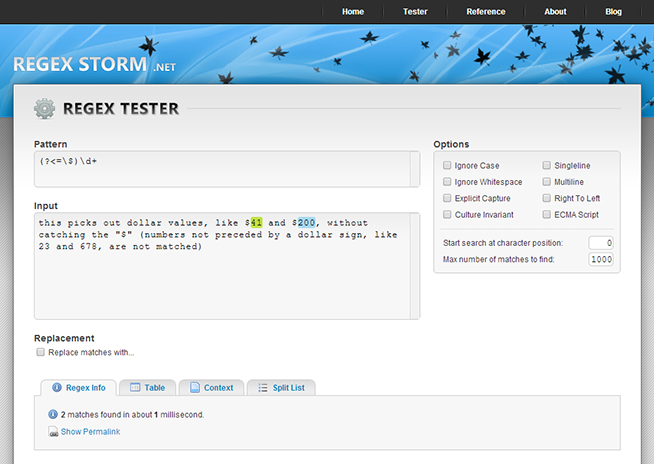 The site is still online and still fully functional, as far as I know. In fact, despite doing barely anything for it in the past few years, traffic is actually growing.

I still get email now and then from someone telling me how useful it is. I’m glad! I plan to keep it online as long as I can, but I still have no plans to continue development on it. The thing is, Regex Storm is woefully outdated. The markup is XHTML! The CSS has browser-specific hacks for Firefox 3! The ajax is an antiquated mess of .NET postbacks via UpdatePanels! At this point, it would be better to start from scratch, but that’s not something I’m willing to take on right now.

I’ve decided to release the codebase for Regex Storm, even if it is a bit outdated. Not that I expect anyone to pick up development. I just don’t have a good reason to keep it closed source. And maybe there are still some good nuggets of code in there somewhere — or at the very least, something for people to rummage through for nostalgia’s sake. Also, to be honest, it’s been taking up one of my paid private repo slots on GitHub, so I may as well.

Feel free to poke around in the Regex Storm GitHub repo.